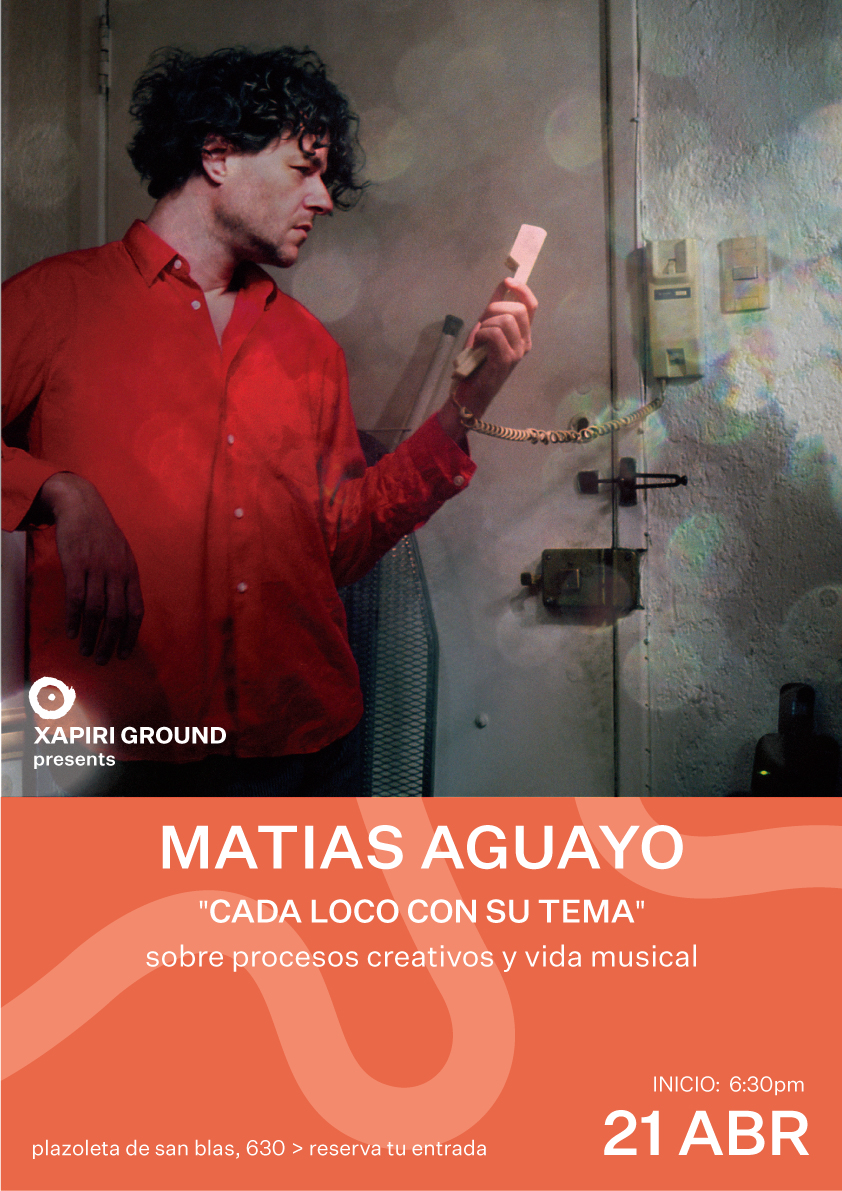 Melanie Dizon
April 21, 2022
We are honored to welcome the pivotal artist Matias Aguayo to share his experience as a creator and activist.

Born in Santiago, Chile; having grown up in Germany, Matias Aguayo is a trans-continental virtuoso known for his immense creative output within the realm of music, sound, and performance. On this intimate night of conversation, he will talk about his life as an artist, crossing creative boundaries, and how music can be a force for social activism.

By Reservation / Limited CapacityReservations can be made in person at the Xapiri Ground Gallery located at the Plazoleta de San Blas, 630. Also by writing to info@xapiriground.org

‍​​Matias Aguayo, Chilean-born and German-raised, has made a hugely varied body of genre defying/ melding work – a blend of deep shadows framed by blinding tropical sun. No matter the tag placed on his tracks, the primary focus and platform for building his music is, what he has always considered his main instrument, his voice.

Calling upon his young adult background within the theatre (where he was directing, acting, and performing) Aguayo uses his voice to slip into different roles and imitate sounds to create an aural illusion. This allows him to use a handful of machines and a microphone, creating sonic ambiguity between vocals and instrumentation, bringing a surge of spontaneity to his recordings and intensely reactive, improvisational live sets as he feeds off the audience and layers his narratives. Kompakt, the legendary Cologne-based techno label, has supported and released his music since his project Closer Musik (2000 – 2003), releasing his first solo record Are You Really Lost (2005), his second album Ay Ay Ay (2009), and the Legende EP(2014).

On his travels and tours, whether in Buenos Aires forming an arts and music project Juventud Clandestina [Clandestine Youth], or later street party happenings, or throwing underground parties in Cologne (Inspiring his A Night At The Tilehouse EP, SoulJazz Records-2007), Matias Aguayo has a magnetic personality that draws him to misfits and outsiders from all over the world that are making unique music and are free-thinking with regards to the musical process. Not one of these people would fit into a specific genre or school.

He created Cómeme as a home for this motley crew. Starting in 2009, Cómeme, is a loosely organized, yet flourishing complex of activity, that eschews traditional label strategies in favor of a collective that closely involves his friends and label-mates. Within its diverse catalogue, Cómeme has released Matias’ album The Visitor (2013) and his most recent multi-faceted project (featuring his own developed dances) the four EPs of El Rudo del House (2015). The mechanical body movements of El Rudo‘s adventurers have spread to all of Matias‘ old haunts as well as new frontiers as far and as near as London, Cologne, Johannesburg, Santiago de Chile, Buenos Aires, Mexico City and Moscow.

Matias’ role in Comeme continues as a facilitator and old school style producer using his resources and experience to help each artist to dive into their own music. If this was a job, then it would seem impossible, but Matias Aguayo’s work and career is instead a bi-product of his life and imagination wrought with creative visions that make his efforts fantastical, as well as possible.

Event Date: 22 AprilTime: 10:00pm onwardsBy Reservation / Limited CapacityReservations can be made in person at the Xapiri Ground Gallery located at the Plazoleta de San Blas, 630. Also by writing to info@xapiriground.org